Originally hailing from Germany, David moved to Oakland, California in his pre-teens & subsequently graduated from University of California, Riverside with a BA in Business Administration. Having an orthopedic surgeon in the family (his father), David was motivated to pursue O & P as a career, so from UC Riverside, he went to Northwestern University and graduated with his degree in orthotics & prosthetics. Along with his wife, Jeanette, David has been in practice in Nevada since 1996, primarily in Elko, but with a mobile practice that covers the entire state! In his off time, he runs Blackman Ranch, which is currently being outfit with solar power, and for fun, he enjoys hiking, scuba diving, and a once a year vacation to Mexico with Marshall Black from OrthoPro Lewiston. David believes in practice integration, so each OrthoPro has an agreement to see each other's patients, free of charge, so that we can best serve the Nevada & Idaho communities. He is the proud owner of OrthoPro of Reno, Inc, OrthoPro of Elko, and several other locally-operated businesses.

David's primary office location is in Elko, NV. Though he does travel through the rural areas in Northern Nevada to see patients as well. 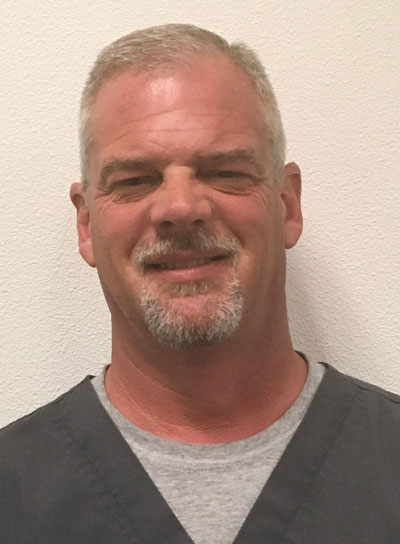 Mark joined OrthoPro of Reno Inc. in April of 2021 and he has since proven to be a vital and indispensable part of the team. Mark is an ABC Certified Prosthetist & Orthotic Practitioner with over 30 years of experience in the field. He started his career in his hometown of St. Cloud, Minnesota during which he played an integral role in the development of the first custom gel liners, the TSB socket system, and the first vacuum assisted socket system. When Mark is not in the office seeing to everything our patients may need, he enjoys fishing, hunting, and especially spending quality time with his family. Ashley currently works at OrthoPro of Reno as an intake coordinator as well as a mastectomy fitter. She started her career with our office in 2018 on the administrative side of the practice. Ashley already had experience fitting mastectomy bras, protheses and supplies from when she worked for a private boutique in 2014. She wanted to continue being a mastectomy fitter in our office so in 2019 is when she decided to put her experience to use. She is trained to properly fit, dispense, and adjust external breast prostheses, bras, and related supplies. Ashley will jump at the chance to help other people, and is generous in giving her time and resources to her work and her patients. Ashley is a perfectionist, so her main goal is to make sure her patient's have the perfect experience in our office!